The Peoples' Democratic Party (HDP) has prepared a report on trustees, saying that the ruling Justice and Development Party (AKP) ignored the votes of millions of people via sacking 47 mayors in the past year.

According to the report, 18 co-mayors were arrested and the appointment of trustees resulted in ignoring the 4,268,558 voters who cast their votes in the March 31, 2019 local elections.

On Aug. 19, 2019 trustees were appointed to Diyarbakır, Van and Mardin municipalities, kicking off what the HDP calls a "Second Trustee Period." Mayors of Iğdır, Batman, Siirt and Hakkari were also sacked. 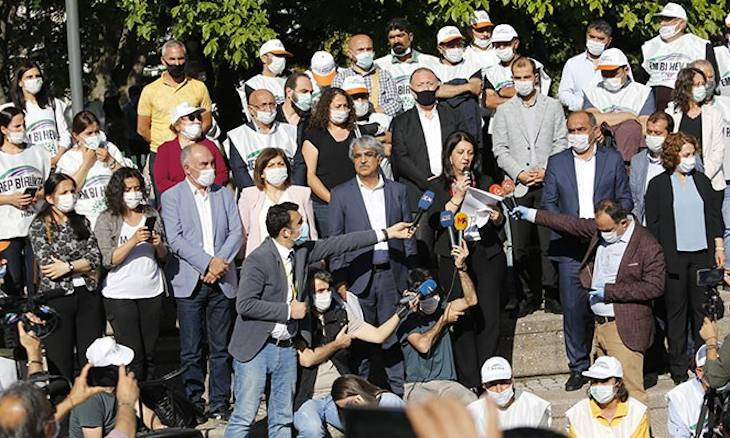 According to the report, the appointment of trustees was followed by bans on all events and demonstrations at the area.

Speaking at the press conference organized to reveal the report, HDP deputy Garo Paylan said that the government wants to prevent the party from getting stronger.

"The peace process was ended and our cities were ravaged," Paylan said on Aug. 18, referring to the peace process between the Kurdistan Workers' Party (PKK) and the state in 2015, which was ended by the government.

"In addition, a politics of coup started to be implemented in order to destroy all the institutional areas that the HDP is powerful in. Our co-chairs and deputies were arrested after their parliamentary immunities were lifted upon the orders of the Presidential Palace. A coup underwent in parliament," Paylan added.

Paylan was referring to the arrests of former HDP co-chairs Selahattin Demirtaş and Figen Yüksekdağ, as well as other deputies, in 2016.

Demirtaş points to 'a secret group' within the state, says 'HDP has evidence'

"He said, 'If they win, we'll take the municipalities back from them.' Erdoğan is a putschist," Paylan noted.

He also criticized opposition parties for not slamming the government's practices enough.