As you all know, serious problems plague Turkish academia. Problems such as the dismissal of academics who demand peace, appointments of trustees, inadequate financial resources, apartment building universities filled with inadequate staff and underqualified academics and the lack of outstanding academic are amongst them.

In line with the principle of communicating vessels, our sad state in the fields of democracy, economy, art, sports, etc. is of course reflected in the academy. Academic studies on alcoholic beverages have long undergone a steep decline. Since the early 2000s, there has been a gradual decrease in studies in areas such as sensory properties of wine, beer, rakı, liquor, etc., chemical compositions, improvement of production techniques and raw materials. In contrast, studies regarding the harm induced by alcohol have gained momentum.

The technical and sensory characteristics of almost all types of drinks in the world are determined by qualitative and quantitative or semi quantitative/qualitative research methods. Significant studies on this matter are conducted in Turkey as well, though most of them are quantitative as far as I can see.

Yet when it comes to food and drink, one’s senses such as taste, smell, vision, touch come into play and a subjective interface develops. A drink that might be “good” to certain people can be “bad” to others. Since one cannot make descriptions with such vague words, the scientific world attempts to base this subjective field on a measurable scale. Thus, a very basic rule in science steps in: One cannot manage what one cannot measure. Therefore, the role of descriptive analyses is progressively increasing.

For this purpose, aromatic ingredients of many types of drinks are also classified from a sensory point of view. As a result of these studies, graphics called sensory identification wheels (circle, spectrum) are created. Such wheels have been developed for many drinks such as whisky, wine, beer, cognac, coffee, etc.

These wheels facilitate successive work in academia. It provides a unity in language and facilitates marketing activities by classifying the products to be produced in the alcoholic beverages industry. It also allows people who research drinks to make more definable descriptions. In Turkey, we are often subjected to epic unfounded comments from various experts. These studies also contribute to the consumer for them to make a more conscious choice and to the development of the culture of drinking. There was one drink left that did not have such a study and such a wheel.

That drink was rakı, Turkey’s national drink. But that is no longer the case. With an open-access study recently published in the journal “Foods” of MDPI (Molecular Diversity Preservation International), which includes qualified academic studies, rakı also obtained a sensory lexicon and taste-aroma wheel. More precisely, a study has been published which is open to development.

Merve Darıcı and Turgut Cabaroğlu from Çukurova University’s Department of Food Engineering as well as the staff of rakı manufacturer Mey İçki company, Duygu Beypınar and Koray Özcan jointly carried out a study entitled, “Sensory Lexicon and Major Volatiles of Rakı Using Descriptive Analysis and GC-FID/MS.” The GC-FID/MS here is a gas chromatography-flame ionization detector-mass spectrometer. With the gas chromatography device used by direct injection method, separation and analysis are done of compounds that can evaporate without decomposition. This device, which determines the presence of compounds and substances in a solution, also adds quantitative properties to the study.

As stated in the article, the purpose of the study is to create a sensory lexicon and to develop a sensory wheel. For this purpose, a total of 37 rakı samples representing all producers were used for volatile and sensory evaluation. In the process of creating a sensory lexicon, a total of 16 assessors took part in the study. The panel consisted of eight females and eight males aged 27–52 years. All assessors had a minimum of five years industry experience and five years sensory analysis experience.
The assessors, whose training was completed in accordance with ISO standards in this field in five sessions, held a tasting event which consisted of thirteen formal sessions. In these sessions, they first sought to try and define the appearance of rakı and nasal aromas. The expert group defined 315 attributes (distinctive characteristics) following the lexicon development panel. The generated sensory terms were reviewed and rationalized. The sensory terms with the same or similar meanings were merged and redundant terms were eliminated.

A trained sensory panel, using descriptive analysis, evaluated the selected 18 samples depending on their categories (premium, mass and low-end). Assessors were chosen from the panel of the lexicon study. The panel included six females and six males aged 27–52 years. All of the assessors had experience in descriptive analysis and were trained according to ISO-8586. Finally, 78 attributes were identified, including 8 attributes related to appearance, 57 related to aroma, 13 attributes related to taste and mouthfeel.

As a result of this study, the main attributes were spicy, anise, sweet, resinous, floral, nutty, fruity, dry fruit, head and tail aroma and white color. The Rakı sensory wheel was created to provide a graphical display of its sensory attributes.

As a result of the study carried out in gas chromatography, the main compounds in rakı depicted the following major volatile compounds n-propanol, 2-methyl-1-propanol, 2 and 3-methyl-1-butanol, ethyl-acetate, acetal, acetaldehyde, trans-anethol and estragole. The characterization of the product using its most distinctive sensory descriptors is an important tool and can be used for the industry, marketing, consumer education and scientists.

As discussed above, many quantitative analyses of rakı have been conducted. At this point, it should be noted that the findings are in line with previous studies, including the authors of the article. Accordingly, higher alcohols are dominant among the suma-based volatiles in Turkish rakı. Amyl alcohols among high alcohols are known to have a negative effect on the flavor of the distillate, and the concentration of amyl alcohol in rakı is higher than similar drinks. Ethyl acetate and acetylate aldehyde are second among volatile substances. The study reports that rakı has a low level of ethyl acetate among grape-based similar drinks. Ethyl acetate is known to contribute positively to the sensory characteristics of rakı, with fruity odors depending on its concentration.
In sum, the article tells us that the ratio of suma (grape alcohol), aniseed quantity, distillation program and the maturation were the most important factors for sensorial discrimination between Rakı samples. It shows a linear relationship between rakı categories (premium, mass and low-end) and positive sensory properties. Premium Rakı samples that are produced only from suma and with the addition of high levels of aniseed were associated with a greater number of aroma attributes.

This study has confirmed that the total amounts of volatile substances from grapes and anise in rakı are compatible with food codes. It also reveals that trans anethol from anise is dominant among volatile substances. At this point, I think it would be useful for manufacturers in the sector to evaluate the excess of high alcohols alongside health research. Different prescriptions in which acetate and esters will be included in different ratios will open the door to pleasant new surprises in rakı production.

Understanding the taste and aroma wheel

To make sense of the sensory wheel, you have to start from the inner circles. The second circle, which comes after the word rakı, tells us that suma (grape distillate), anise, pot still distillation technique and maturation stages are the first phase in the depiction of sensory property.
The third circle contains parameters with which the sensory characteristics are associated. For example, for anise colored in yellow, we see that aroma substances are the main determinants of the appearance and the mouthfeel. 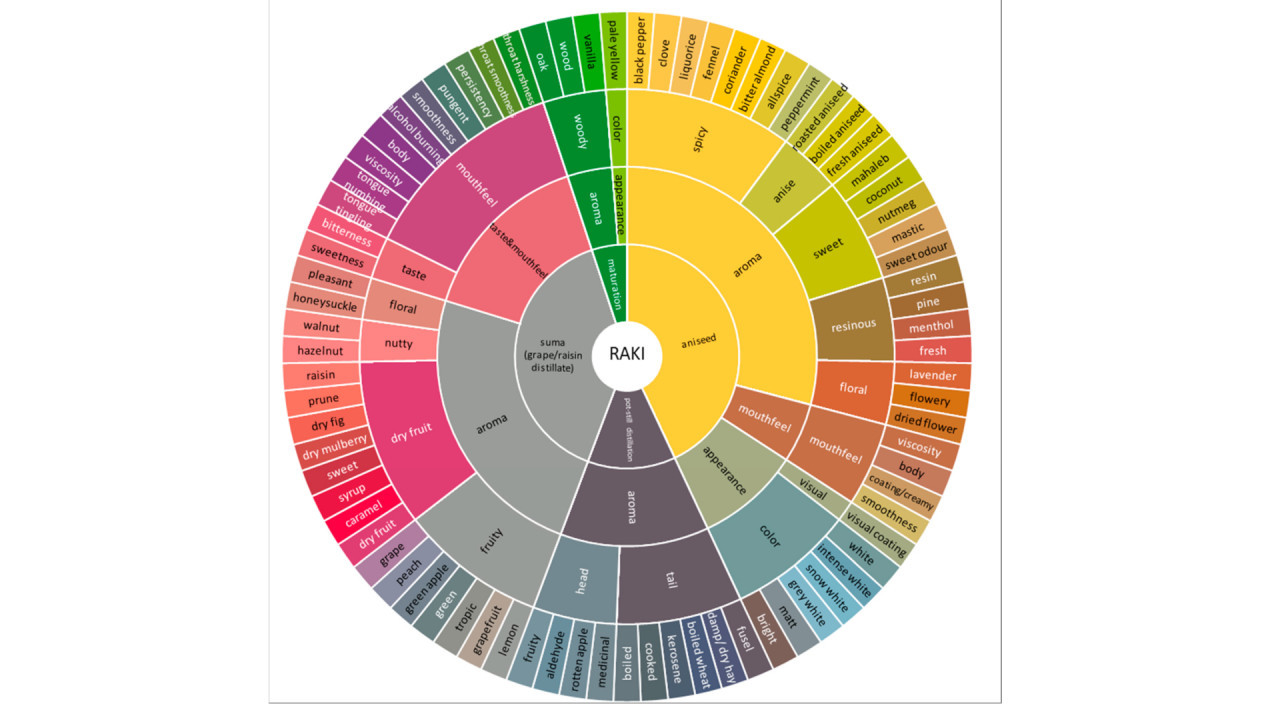 In the fourth circle, the descriptions become a little clearer. Again, if we start from the anise sample, we can see that the aroma of anise is classified as spicy, aniseed, sweet, resinous and floral. In the fifth circle, the descriptions are classified more clearly. We can see that the spice aromas for anise resemble black pepper, cloves, liquorice, fennel, coriander, bitter almond, all spice or peppermint.

If you make a tasting session in accordance with this wheel, a subjective description of the rakı in your hand can be as follows: “While the black pepper scents from anise are the dominant character, the smell of honeysuckle can be distinguished in the floral scents that come from the suma. This rakı leaves a smooth feeling on the palate. Woody and balanced flavors from the oak barrel indicate a strong maturing process. Although its light-yellow color makes a slight blur in the glass compared to the classic rakı white, it does not create a surprise in terms of the taste and aroma it offers.”

Again, these wheels are of utmost importance for academia, industry and marketing activities rather than consumers or tasting events. I hope and wish that this study, which a liquor company has carried out and financed in partnership with the academy, will be the first of many other studies. An academia where this and other consecutive studies come one after the other means the world to us; but before anything else, it means “the country we yearn for.” 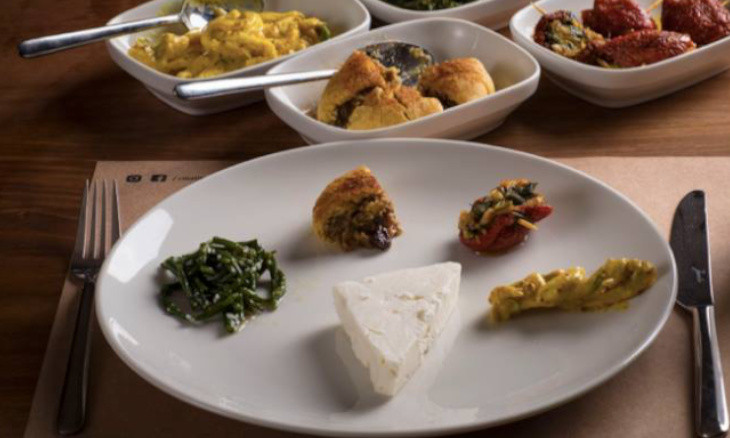