Being LGBT in Turkey has always been tough. Now it's even worse.

Turkey's eyes have been on Boğaziçi University since President Recep Tayyip Erdoğan appointed a pro-government rector to the country's most prestigious higher education institution. Students and academics have been protesting the appointment for being anti-democratic, as they also call on Melih Bulu, the so-called rector with inadequate skills in numerous areas, to resign.

While there were attempts to criminalize the students by calling them "terrorists" - a word that Erdoğan's critics are so accustomed to hearing - in the beginning, the protests have recently become a tool for the ruling Justice and Development Party (AKP) to target LGBT individuals.

The most recent hate campaign against the LGBT community began when a group of students used a picture of Kaaba, a holy site for Muslims, featuring Pride flags in an art exhibition on campus during the protests. The image caught the attention of Boğaziçi University's Islamic Studies Club (BİSAK), which took the issue to social media.

"We will never allow our Islamic values to be made fun of within our university. We don't accept this immorality to be legitimized under the guise of art," BİSAK said in a tweet on Jan. 29, paving the way for a homophobia wave to begin.

The first person to target the LGBT community after BİSAK's tweet was Ali Erbaş, a known homophobic who last year claimed that LGBT people "spread diseases" and the head of Turkey's Religious Affairs Directorate (Diyanet). Erbaş said that they would be filing complaints against the students in question for "attacking our Islamic values." Two students were arrested the next day.

Perhaps the most homophobic statements were made by Interior Minister Süleyman Soylu, who called LGBT people "perverted" on Jan. 30 and Feb. 2.

"This LGBT thing is something that doesn't suit our values and that was introduced by the West. Do we have such things as LGBT in our past?" Soylu asked.

'We were expecting this'

The recent wave of homophobia also includes an attempt to make the LGBT community seem like an illegal organization that's against Islamic values. The aim of this attempt, without a doubt, is to turn the predominantly Muslim society against the LGBT community and legitimize the insults hurled at them.

According to LGBT activist Tunca Özlen, the community started to expect this intense attack on LGBT people following the 2013 Gezi Park protests, which was when millions of people flocked to the streets against the government.

"Turkey was getting more and more Islamist and the LGBT movement was on the rise. We expected these two to clash," Özlen told Duvar English.

"The AKP created its own Alevis, Kurds, and women to some extent, but it can't create its LGBT people because political Islam is against it. The only group that the AKP couldn't include, even to assimilate, is the LGBT community. That's why they target us so much," he said.

"The Ankara Bar Association criticized it and it ended with the government changing the bar association law," he said, referring to a law that was passed in parliament last year that aimed to bring Turkey's judiciary further under political control.

"Today's events look like the beginning of round two. They may discuss the Istanbul Convention by making this an excuse," Özlen said. "Targeting the LGBT community is a tool for the government."

The Istanbul Convention, an international treaty that's a pillar of legal protection against domestic violence and violence against women, was at the center of Turkey's agenda last summer when the government signaled the country's withdrawal, mainly due to the pressure from Islamist circles, who claim that the document "encourages homosexuality."

According to Özlen, the government benefits from attacking LGBT people due to it being seen as a "legitimate excuse" to bring its agenda to life.

"It's very useful for them to attack LGBT people. They know that the opposition won't protect the LGBT community and it also consolidates its own party base," he said, adding that the attack is being used to build a new regime and design the society.

"This also makes religious cults very happy. The cults are utterly uncomfortable with LGBT organizations and the fact that they are visible," Özlen noted.

When asked whether he feels threatened or anxious in light of the government's recent homophobic discourse, Özlen said, "I don't feel safe."

"I feel more anxious - not on the streets, but on Twitter. I feel like I need to be more careful on Twitter to the point that I auto-censor myself. A lot of LGBT people on Twitter started to use nicknames and removed their pictures. We all feel more unprotected and trapped in these periods," he said.

"On the other hand, we're used to these insults. 'You're sick, you're perverted' and etc. After a certain point, you start to not hear them because we are here, we exist and we won't disappear," Özlen said.

"Until which point can you be afraid anyway? Yes, people change their names on social media and hide their true identities, but they still tweet about these issues and continue to raise their voices," he noted.

For Okan, a journalist who asked not to be named but chose to be addressed as "Okan" instead, the attacks on LGBT people have been systematically ongoing for a long time.

The 30-year-old journalist said that he was born and raised in the Central Anatolian province of Konya, which is one of the most conservative cities in Turkey, and later moved to Istanbul, a city that's known for its diversity.

"I realized that I was gay in Konya and had my first relationship there. Now I'm in Istanbul and have a decent job and a house, but I've never felt more anxious and uneasy," Okan told Duvar English.

"Imagine this: You're sitting at home, working or watching something, and then a guy who gets his salary from your taxes hurls insults at you just because he wants to," he said.

During the interview, Okan realized that he hasn't worn his socks with a rainbow design for a long time.

"I loved those socks. I now realize that I haven't worn them for some time. Maybe I did it unconsciously out of anxiety," he said.

Rainbow-themed items, even children's books, are met with suspicion by Turkish authorities, who ordered an 18+ age restriction to be placed on them last year.

When asked what he thinks about Soylu's remarks on LGBT people being "perverted," Okan said, "Of course we're not!"

"I really can't understand why would they bother with what people do in their bedrooms. It's shameful! I have a sexual life that's way more normal when compared to Turkey as a whole. I fully reject the word 'perverted,'" he said.

"I don't know what they will do next. They caused me to feel nervous even when I'm sitting at home by myself," Okan said.

According to LGBT activist and feminist Pınar Karabağ, politicians' statements targeting LGBT people lead to hatred towards the community.

"The statements of these individuals who address masses return to us as hatred, enmity and grudge among the public," Karabağ told Duvar English.

"You constantly face negative reactions in your daily life by the people around you, but they can't express this anger from such a high place. However, when politicians make these statements against LGBT individuals, the fascists or phobics in the public start to present their enmities more easily," she said.

Karabağ noted that she feels more fearful when she carries her rainbow-themed bag.

"Because I fear that one might look at it and think, 'She must be a lesbian or bisexual' and legitimize attacking me. There is this constant fear. We are continuing our struggle as part of activism and we continue to live, but with more fear. According to them, we shouldn't be living anyway," she said.

'You struggle for your existence'

Saying that all the critics of the government face being sued or prison sentences, Karabağ noted that LGBT people are additionally struggling because of their identities not being recognized.

"The Alevis, Kurds or migrants are recognized in the society even if they are discriminated against. Their existence is not denied. LGBT individuals are not exactly denied, but they're also not accepted. 'Yes there are LGBT people, but we don't want them' is what they say," she said.

"Because you have an identity that's not recognized, you are in a constant struggle. You struggle for your existence. We are afraid, of course we are! It's a feeling that can't be prevented, but you don't want to hide. Instead, you want to continue your struggle even more. The identity is something very basic that you can't disown, hide or abandon," Karabağ also said, adding that the LGBT movement is getting stronger in the face of these challenges.

'They are afraid of us'

Transgender people are perhaps those who face violence, abuse and discrimination the most in Turkey. While they often face difficulties in finding jobs other than sex work, they also frequently become victims of hate crimes and the perpetrators enjoy full impunity.

Göksu Başaran, a transgender actress, said that the government insults LGBT individuals because they know that the community is strong.

"We are not a minority, but we are the majority. They target us with hate speech and call us 'perverted,' but they do it because they know that we are strong. They want to intimidate and silence us because they're afraid of us. We'll always speak up," Başaran told Duvar English.

"Some of my LGBT friends are afraid, but I'm absolutely not. I tell them to not be afraid and that they are not alone. I'm not afraid of being put in jail," she said, as she also gave the imprisonment of two Boğaziçi University students as an example of the way the government treats LGBT people.

'I do sex work to not starve'

According to Başaran, the government doesn't want to see transgender people in the media.

"There are currently no projects because of the pandemic. The government banned us and said, 'I absolutely don't want to see you in the media.' I'm not hungry because I'm doing sex work," she said.

"I'm doing this to not starve. I'm doing this because they gave me no other choice. I can't rob people or hurt them, so I earn money by selling my own body. I have to do it," Başaran noted.

When asked whether she is afraid of the current wave of hate, Başaran said, "I only fear God."

"I never fear governments. Many governments came to power and left eventually. This one is not permanent either. I'm telling everyone who is afraid: Calm down and don't be afraid. They're just intimidating us. They want to silence us just like they do to all the critical voices," she said.

"We exist and we will continue to exist." 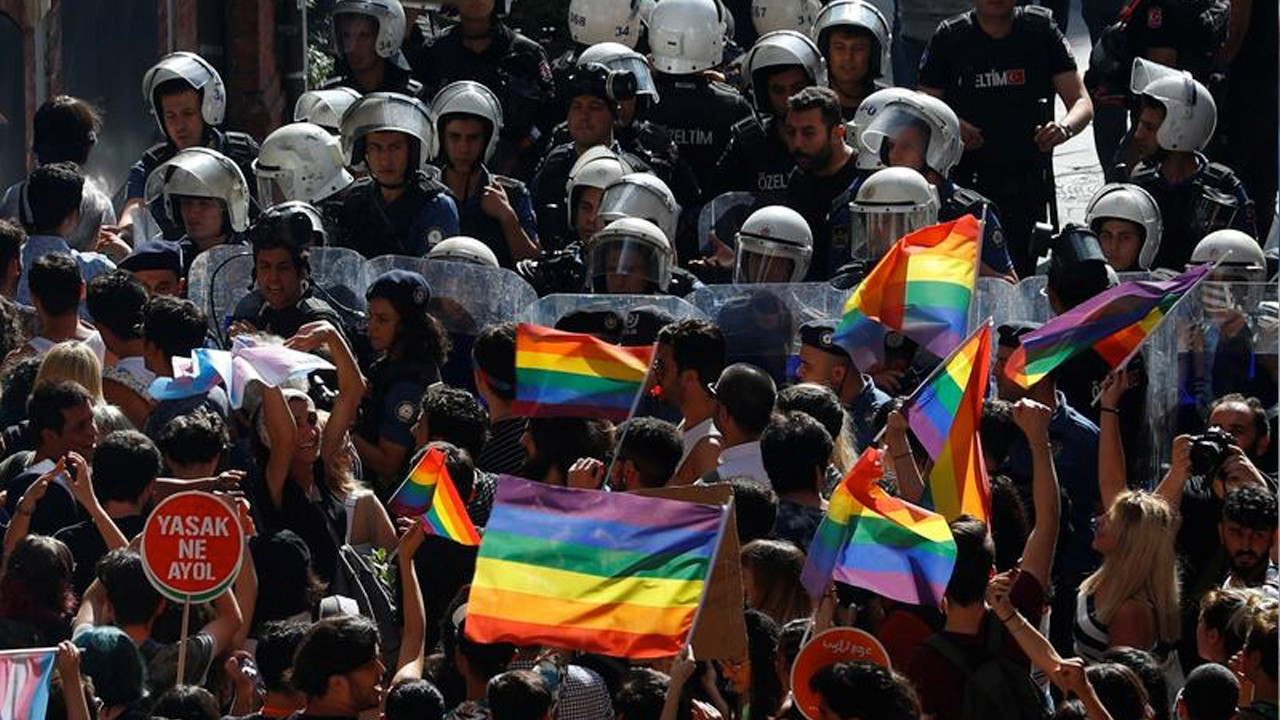