Amal, a nine-year-old Syrian refugee, stands on a beach at Cesme, an Aegean coastal town 70 kilometers from Izmir on August 8. She is surrounded by old shoes that symbolize the many refugees who have tried to make the same journey, often with tragic results. Syrian dj Om el-beat plays a playlist of nostalgia, possibly inspired by her own experience.

The compelling imagery is amplified by the fact that Amal is a 3.5-meter-tall puppet with dark curls of fiber and mournful eyes. Turkey is the first leg of her 10-million-step journey, filled with public events and art festivals in seven different countries, to raise awareness on the plight of the refugee children on the decennial of the Syrian War.

Just like the Syrian refugee children she represents, Amal travels slowly and with incertitude in a troubled path that starts at the Turkish-Syrian border. The proıject, which was born from a group of artists in a refugee camp in Calais two years ago, was first postponed due to the pandemic.

When it started in July, Amal arrived in Turkey in an atmosphere of growing anti-refugee sentiment triggered by the arrival of Afghan refugees and sadness over the wildfires. “Her path literally crossed areas where there were forest fires,” explained Recep Tuna, the co-producer in Turkey. “It made us realize once more that it was not only wars but environmental disasters that created refugees.” 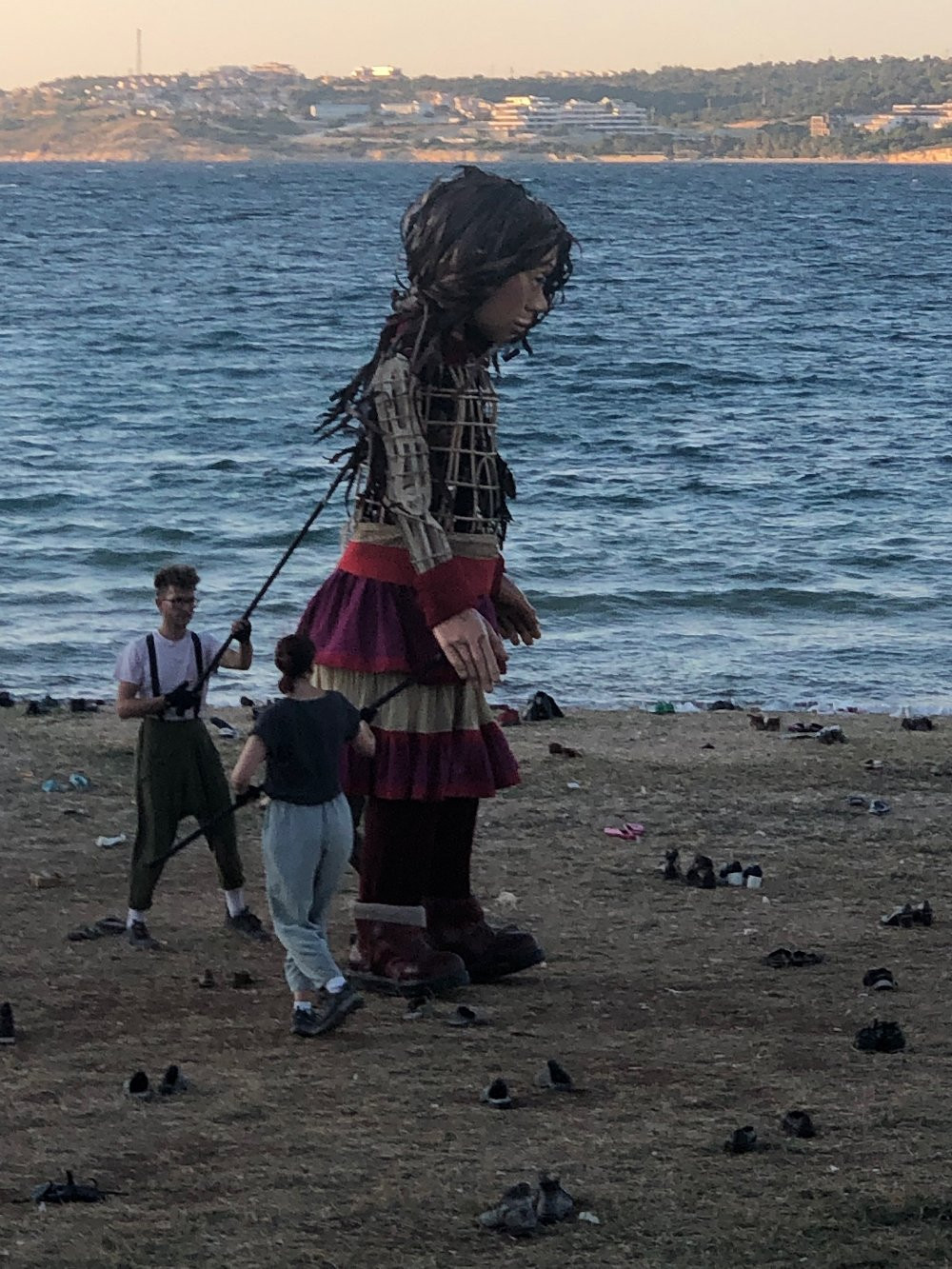 Amal immediately made a statement expressing her sadness over the fires in Turkey. “The Walk of Little Amal continues with deep sympathy for all who are affected. The Walk is a festival of hope. We hope that all the countries suffering from this disaster achieve a speedy recovery,” she tweeted.

Her time in Turkey - from July 27 to August 8 - represented the challenges of the Syrian refugees and focused on the cultural diversity of Turkey. “While planning the journey - in Turkey, like everywhere - we asked our partners one question: if a refugee girl came to your town, what would you like to show her, what would you share with her?” said Tuna.

Amal’s voyage that starts at Gaziantep’s Kilis bus station, an arrival point of many refugees, continued with a visit to Kırkayak cultural center where she met with Turkish and Syrian women who offered her local food and told their own stories. Gaziantep Mayor Fatma Şahin hosted the producers.

In Adana, Amal crossed the historic Taşköprü (Stone Bridge) as hand-made migratory birds whispered the path to take to the child. In a powerful message against femicide and gender-based violence, Amal stopped at the city cemetery of Mersin and places a flower at the grave of Ozgecan Aslan, the nineteen-year-old victim of femicide.

In Denizli, she walked through the streets and saw portraits of refugees on the city walls. In Urla, she met with artists and had a meal of local cuisine, one that is sharply different than the meal she shared with the residents of Gaziantep, the gastronomic capital of the country.

Her last stop was Izmir, where many refugees tried to cross into Greece before the 2016 Turkey-EU deal under which Turkey agreed to tightly control the illegal migratory routes and take back the Syrian refugees who crossed over to Greece. In this final point in Turkey, she met with six giant puppets made for the occasion by refugee children in workshops carried out by International Puppet Days and Goethe-Institut. She also made a tour of the Konak square, at the historical center of the city which is on the temporary list of UNESCO.

And finally ready to leave Turkey, Amal arrived at the Aegean beach, not too far away from the point that the lifeless body of Syrian toddler Aylan Kurdi was swept onto the beach in 2015, becoming a symbol of refugees who lost their lives on deadly journeys to European shores.

“This is a very powerful moment in Amal’s journey,” said Adrian Kohler, the “father” of Amal, on the Aegean beach. He and his partner Basil Jones, co-founders of the Handspring Company, postponed their retirement to make the giant puppet with light but durable materials that could stand the long walk and both accompanied Amal on the tour. So did Amir Nizar Zuabi, the Palestinian-British artistic director of the project.

“It is because the attention of the world is elsewhere right now that it is more important than ever to reignite the conversation about the refugee crisis and to change the narrative around it. Yes, refugees need food and blankets, but they also need dignity and a voice. The purpose of The Walk is to highlight the potential of the refugee, not just their dire circumstances,” said Zuabi in a zoom meeting. “It is important that the journey starts in Turkey, because Turkey has the largest number of refugees in the world.” Turkey has 3.6 million Syrian refugees, 1.2 million of which are children.

Turkey, the first stop, proved to be a pilot for the whole project. “Besides the rehearsals in the UK, Amal took her first steps in Turkey - we learned that the puppet was more flexible and loving; she could bend, hug people, blow kisses and put her hand on her heart. This really touched people,” Tuna said.

Tuna says that the project – where IKSV is a local partner- is one of hope, but the organizers are acutely aware of the difficulties and challenges, including the rising anger at refugees in Turkey and beyond. “But let us that forget that this is a country of people who have mostly come from somewhere - be it the steppes of Central Asia or the valleys of Balkans,” Tuna said. “Perhaps we should remember this once more.”

In Turkey, Amal’s arrival coincides with the rising anti-refugee rhetoric in the political circles and xenophobia among the public. Fueled by a new wave of Afghan refugees crossing into Turkey to escape the Taliban, the Justice and Development Party’s (AKP) policy toward the internationally displaces people - from the Afghans seeking refuge to Syrians under temporary protection - are under fire. Anti-refugee and xenophobic acts, such as Bolu Mayor Tanju Ozcan’s proposal to make refugees pay ten times more for water and electricity are as fiercely defended by some people as it is attacked by others.

“The overall picture regarding refugees and migrants, is now gloomier, with tensions caused by the pandemic and the economic crisis triggering an anti-refugee sentiment among Turkish society, which had initially welcomed the Syrians, thinking they’d be temporary,” Şebnem Köser Akçapar, the director of the Ankara-based Global Migration Research Center, said.