Glass artist Feleksan Onar always thought that her birds without wings, fragile creatures in gem colors, had to fly home eventually. Home, to her, was Istanbul. The glass sparrows had been “perched” in Victoria and Albert Museum in London, Pergamon Museum in Berlin, and Staatliche Kunstsammlungen in Dresden. Finally last week, the birds found a new home at Istanbul’s Sadberk Hanım Museum, a historical mansion that overlooks the Bosphorus.

Her new exhibition, “After Utopia: The Birds” combines the birds with items from the museum’s extensive archeology collection. “The birds, coupled with the museum’s artifacts that are in an ongoing migration from one place to the other since antiquity, offer the visitors a multilateral narrative,” Hülya Bilgi, the museum’s director, explains. “They invite the audience to question phenomena such as identity, belonging, heritage and borders by blending with the metanarrative of their temporary nest, one that offers a continuous chronology from the Anatolian Neolithic to our days.”

The archaeological objects in the exhibition, handpicked by Onar and curator Arie Amaya-Akkermans, include a marble Kilia figurine from the Bronze Age, a partridge-shaped drinking vessel from the Old Assyrian ceramics period, and Ottoman tiles from Iznik with boats and birds on them.

Given Onar’s roots in the Aegean, it is not surprising that birds and vessels are intertwined with migration in her narrative. Boats and ports played a vital role for the Greek-speaking citizens of Izmir who made their way across the Aegean, first in the final stages of Turkey’s War of Liberation and then in the population exchange of Turks in Greece and Greeks in Turkey with the Lausanne Treaty.

Onar’s earlier work, Perched, was a tribute to the population exchange of the 20th century and the Syrian refugees of the 21st century. But her birds, like the characters in British author Louis de Bernieres’ best-selling book about a Greco-Turkish village in the Aegean, are far from associated with freedom.

“When I read de Bernieres’ ‘Birds Without Wings,’ I was moved because I knew the places, the people, the impact,” said Onar. The novel, set in a fictional village called Eskibahçe (based on the ghost village of Kayaköy near Fethiye) paints a vivid picture of life in the village where Turks, Greeks and one Armenian lived until the First World War. Then the Turkish War of Independence breaks out. “You have written our War and Peace,” a Turkish fan once told de Bernieres, who also wrote poignant short stories on Turks. Asked to write the prologue for “Perched,” Louis de Bernieres proposed to write a short story instead, “Our Debt to Birds,” where a guilt-stricken child desperately seeks to save the bird he shot.

“The short story brought me together first with Akkermans, the writer and the curator behind ‘After Utopia: The Birds’ and, then, also with the work of the ancient comedian Aristophanes [who wrote a play called The Birds],” says Onar. 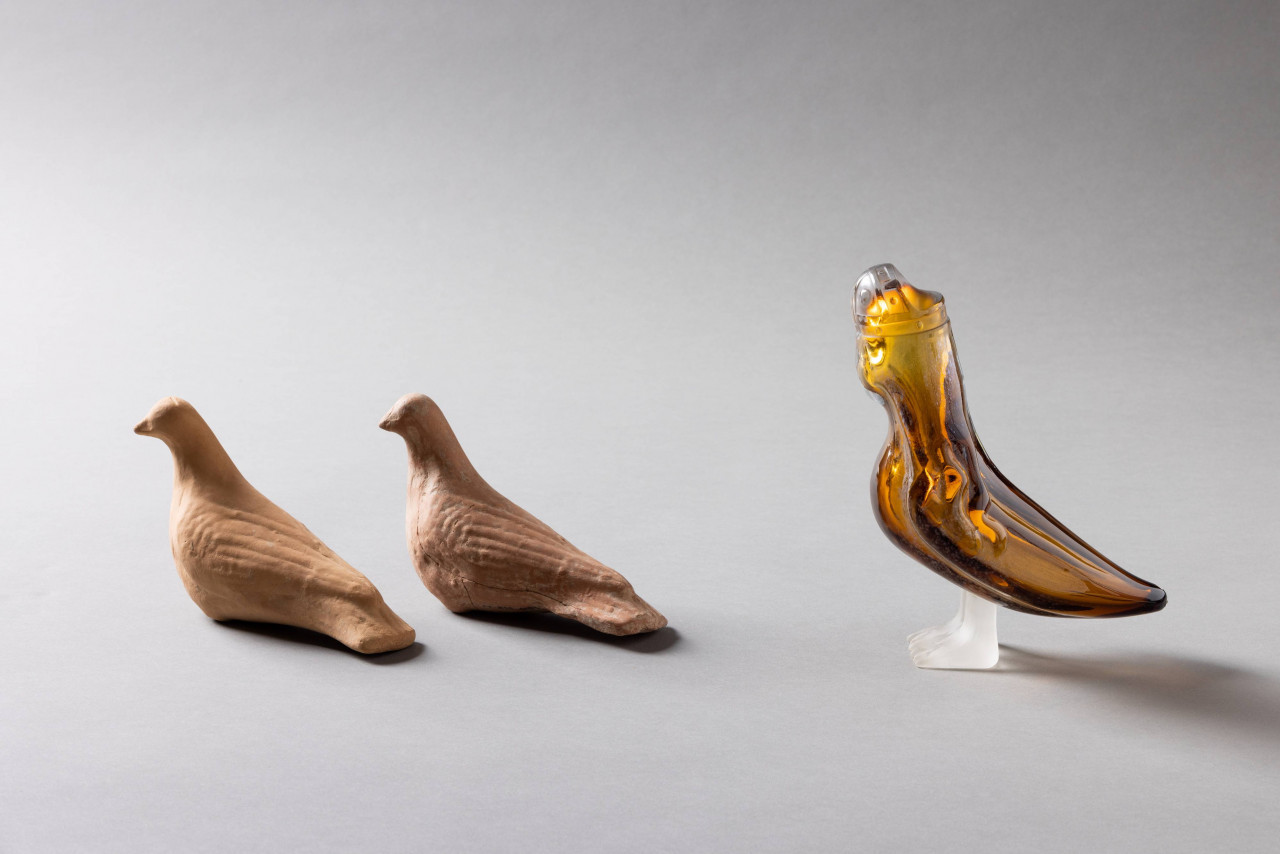 Akkermans, an art critic with a long-standing interest in the minorities of Turkey, wrote the centerpiece of the exhibition: a contemporary play that combines the staples of classical Greek plays with Karagöz-Hacivat, two central figures of the Turkish shadow theater. The wingless birds of the “Perched” played the Greek chorus. Onar created Tereus, an amber-colored hoopoe, and the Messenger Bird, a sharp-tongued, quizzical creature of gray glass. Onar-Akkermans duo also drew their inspirations from Karamanlides, ethnic Turks from the central Anatolian town of Kayseri who had converted to Orthodox Christianity. They spoke Turkish but wrote in Greek letters. “They were Turkish enough to write Maasallah in Greek letters on their front doors but they were, nonetheless, part of the population exchange and had no place in the new republic,” Onar said.

The chorus in Akkermans’ play describes the sorrow of departure:

Horns of exchange were blown,

Suddenly our towns were taken.

An order was given from the Lausanne Conference.

Ferman is from the top; this will not stop.

The 30-minute play is aired on one of the exhibit's walls, with vivid photographs of the ‘characters’ and chirpy voices of Mairi Pardalaki and Barış Yapar. Female figurines, tiles, and other objects on the display shelves are tied to each other by form and color. Two terracotta pigeons from the 5th century BC look like they can be the first ancestors of Onar’s glass birds. “They were probably meant to be toys,” explains Akkermans. A wide-rimmed cup from the late Hellenistic period has the same shade of amber as Tereus. A small janiform bottle from the late Roman Imperial Period (late 1st – early 2nd century AD) is the same color as Odysseus, a glass bird who undertakes the role of the chorus in the play and is fond of quoting verses of Homeros and Kavafis.

“The glass technique has not changed that much throughout centuries,” Onar explains. “Neither has our experiences and feelings. While reading the play The Birds, written 2,500 years ago, over and over, I could not help thinking about how much it relates to our day and age and how similar our experiences and feelings are to those of Athenian citizens in the early 4th century BC. I, too, felt like escaping to Cloudcuckooland, along with the rest of my wingless birds.”

“After Utopia: The Birds” can be seen in the Sadberk Hanım Museum until the end of February 2023. 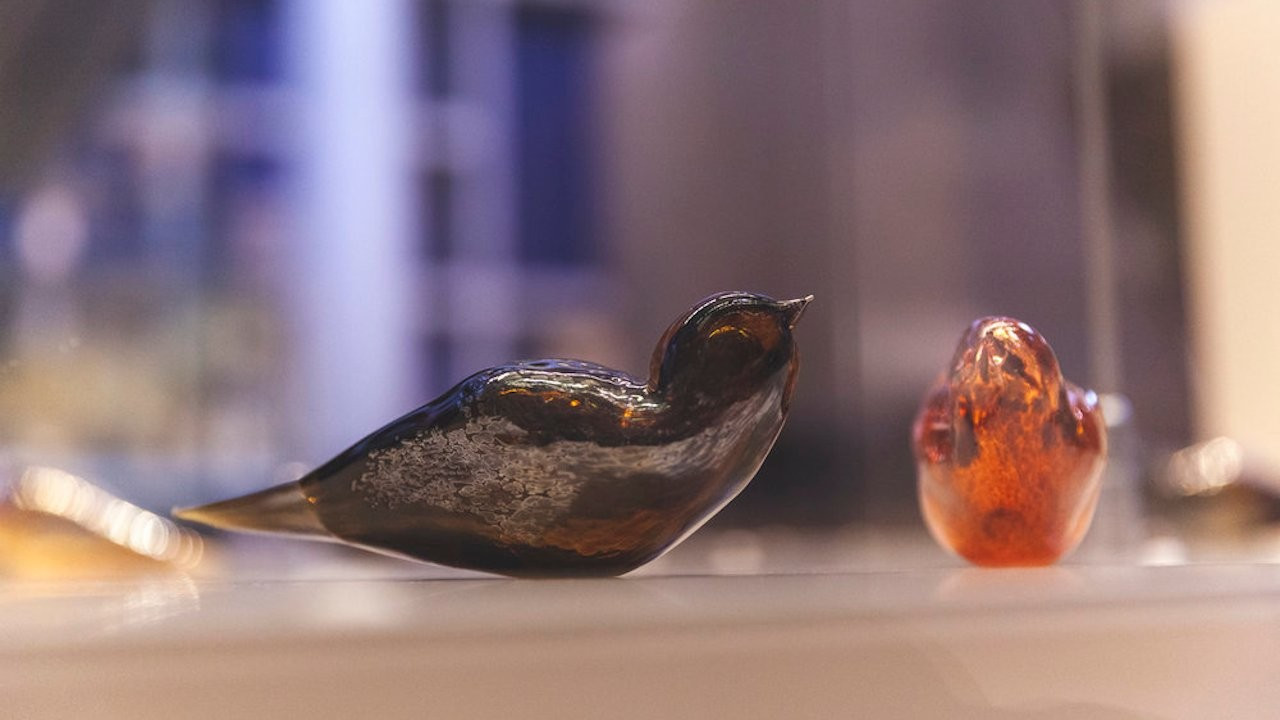