In the Turkish capital Ankara, after three months, all of a sudden, former Minister of Treasury and Finance Berat Albayrak’s circle started a defense campaign regarding the eroded foreign currency reserve. They are making statements based on “There is no reserve that has been eroded.” They are issuing demagogic statements advocating their former stance and they are posting tweets. Why all of a sudden? Because opposition parties are pointing their fingers at the correct place.

As a matter of fact, officials, starting with the outgoing Central Bank Governor Murat Çetinkaya, and another former Central Bank governor, Murat Uysal, who was also removed, never made any satisfactory statements to the public. They had covered up and hid data. Likewise, former Finance Minister Albayrak, who was relieved from office, never spoke up while in office.

They had started hiding the swap transactions, which were the main instruments for covering and making up foreign currency reserves losses. This data was used to be issued before they started transferring the reserves of the Central Bank to public banks through “back door” methods, to be sold at the market. This went on all the way until Governor Naci Ağbal took office.

After the finance minister and the CB governor were dismissed in November 2020, media reports appeared saying that “the President was unaware that the reserves had been eroded to this extent.” Sources familiar with the matter also told me, “the President became aware of the gravity of the situation on the week of Nov. 6.”

Then there was a silence that went on for three and a half months. There was no denial from Ankara, which normally reacts to even the slightest piece of disturbing news for them.

Occasionally, certain disapproving stories were published against the newly appointed Central Bank Governor Naci Ağbal and the Treasury and Finance Minister Lütfi Elvan. They were published in those media outlets close to Albayrak. The new administration withdrew all of the wrong decisions Albayrak had made in the past year. They removed his team also. With these steps taken, the bleeding in the reserves and the value of the Turkish Lira stopped and financial stability concerns were curbed.

Then, all of a sudden, in the past 10 or so days, while the opposition parties went on questioning the situation, their defense mechanism was activated for no known reason.

The most interesting statement came from the new Minister Lütfi Elvan, who replaced Albayrak. In a Twitter message Sunday evening, Elvan said: “I strongly condemn the unfair and low-level rhetoric carried out by the main opposition Republican People’s Party (CHP) in recent days against our former Minister of Treasury and Finance, Berat Albayrak, regarding the foreign currency reserves.”

“Under the 2020 pandemic circumstances, foreign currency reserve transactions were carried out in line with the goal of financial stability. An environment mandated by unusual fluctuations in global markets forced them. It is unacceptable to interpret these transactions incorrectly and use them as low-level political material.”

Let alone the political polemic, these parts of the statement of the new minister are worth noting: “under pandemic circumstances, foreign currency reserve transactions were carried out in line with the goal of financial stability. An environment mandated by unusual fluctuations in global markets forced them.”

Elvan referred to CHP’s sarcastic tweet posted on Twitter on February 20, “Where’s the money? Lost... So, where's the son-in-law? Join and Play; find the lost son-in-law.”

Albayrak’s lawyers have already announced that they will sue. At the beginning of their statement are these words that have been repeated in stereotypical mode for 10 days:

“There is no possibility that any amount of foreign currency or TL of the Central Bank be transferred to a different place, to disappear or to vanish. In addition, every penny of the money flow can be traced and tracked.”

Elvan’s message was written for some kind of political defense. The question is whether or not there is any economic reality in this. In the first place, the “vanishing” does not mean it has disappeared. It means it has been eroded, changed hands, went out of control of the monetary policy institution in charge of public policy-making.

Those wrong decisions made domestically directly caused fluctuations, not the pandemic conditions and international markets. Those are the decisions that the new economy managers, the Elvan-Ağbal duo changed immediately as soon as they took office. These erroneous decisions caused inconveniences to households and companies; also, they increased foreign currency and gold purchases and accelerated foreign currency exits.

These decisions forced private banks to give loans and expand their credit portfolios to gigantic dimensions. Public banks were given directives which flooded the market with loans and created negative real interest conditions, which prompted citizens and companies to rush for foreign currency and gold. The insecurity created by bad management added to the worsening of the situation.

Albayrak and his team, who regarded foreign investors as players who “played games against Turkey by bringing down the value of the lira,” imposed bans and restrictions, which in turn led to capital exits. They somehow started to implement slight capital controls. Not only short-term portfolio movements, but long-term direct investment net entries died completely.

If we agree that foreign investors exited their foreign currency with liquidity concerns, even so; who created the environment that also created concern for residents and urged them to buy foreign currency? Who brought real interest rates to a negative level?

Moreover, they eroded the country’s foreign currency reserves with “back door” methods to hide this abnormal situation. They tried to give the image that “exchange rates are not increasing” or that “rates are in balance.” They did all of this in a totally non-transparent way. Moreover, they misled economic units by giving the impression that a floating exchange rate system was continuing where rates were determined freely by the market. These moves were totally incompatible with righteous economic management.

Turkey's foreign currency reserves have never been eroded so much, as $75 billion, during any domestic or external crisis period, as they were in seven months, from February 2020 to September 2020. This calculation is correct: Starting in February before the 2019 local elections and ending in September 2020, the Central Bank's net international reserves eroded by $102 billion. Considering that the other country swaps of $16 billion were just balance sheet makeup, it is clear that close to $120 billion of foreign currency has been eroded.

February 22 was the 20th anniversary of Turkey’s adopting the floating exchange rate regime when it had to abandon the fixed rate regime in the 2001 crisis. A fixed rate regime is a regime where monetary policy is not independent. Therefore, it is normal to experience reserve losses in fixed regimes. For example, the Qatari or Saudi riyals are examples for this. They are able to keep their exchange rate at a fixed level with petro-dollars.

However, for a country like Turkey which does not have petro-dollars, this is highly adventurous. This is what was done in Turkey.

The floating exchange rate regime is a regime with open capital movements in which rates are freely formed in the market. Central banks do not make interventions. Central banks intervene in extreme fluctuations with decisions regarding the interest rate of their national currency and its liquidity. Central banks with good reputations have an effective ability to intervene verbally. They do not have any concern to hold the exchange rate fixed, but they have a concern to protect the value of their national currency. This is the correct approach. This is to bring inflation to the level of price stability with an independent monetary policy.

The extraordinary loss of reserves in Turkey's floating rate regime was experienced by the Central Bank under the political directives of the Albayrak era. In the floating exchange rate regime, the rate is freely formed and monetary policy is independent. However, in the last two years, monetary policy, which was not independent anyway, has gone astray under political directives. It was politically engaged in an effort to manage both exchange rates and interest rates. For this reason, there was a severe loss of reserves. 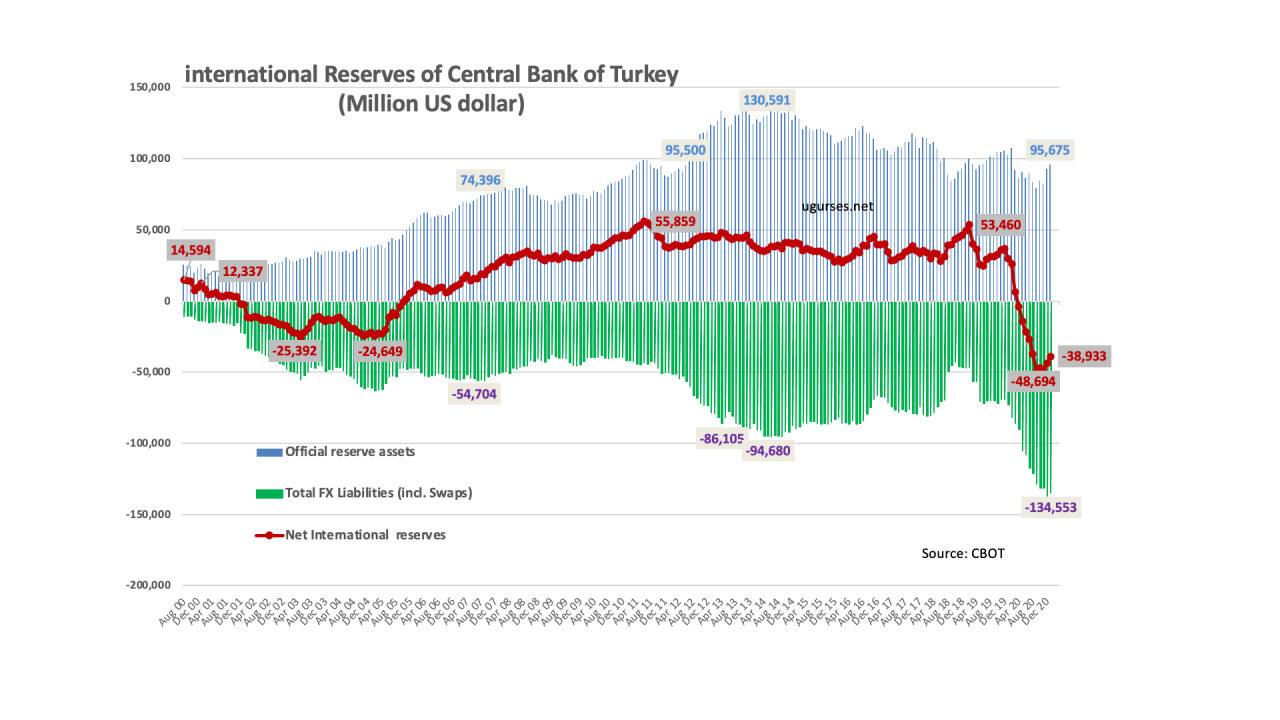 The “back door” foreign currency sales, which are not a practice specific to the pandemic period, are made to curb the exchange rate increase (it is a kind of confession to say that it was done to fight financial instability). These erroneous and incorrect policies have triggered exchange rate hikes and ultimately jeopardized the financial security of the country. Eroding the country’s reserves have brought the country to a high negative reserve.

Minister Albayrak did not even feel the need to make a public statement and answer questions when he left office with an Instagram post. But now he is reportedly going to sue those segments waiting for answers because “his personal rights were violated.”

In fact, is it not more disturbing that he has been removed from office, his decisions have been withdrawn and reversed, his aides have also been removed?

Every citizen who carries the national money TL in his or her pocket has the right to ask questions about the economy, economic institutions, especially the Central Bank, and about its reserves.

Lütfi Elvan may have written these words politically. But, what consequence of the pandemic is it, that at a time when there is a foreign trade deficit of about $50 billion, they have spent reserves to import $25 billion worth of gold? Or what connection does this have to the pandemic, to create an additional $5 billion deficit because of policies fueling auto imports?

Is it not more hurtful and painful for an economy minister that the citizens of one country move away from their own money and rush for gold or for another currency minted in other countries? Who will defend the reputation of the country’s money? What amount of compensation can make up for this?

I first asked this question at the Central Bank meeting in April 2019. Why were the data on foreign currency reserves hidden? Then the CB came up with different data. But the hiding went on.

The critical question is whether it is true that the President really did not know that the reserves were eroded to this extent. When looked through the “financial security” glasses, a view sponsored by Ankara nowadays, how was such a huge foreign currency reserve deficit hidden, jeopardizing the financial security of the country? In case of a possible sanction or an external threat, then our current situation is at a more fragile threshold than the Brunson crisis in 2018, right?

Looking at charts, we can see that during the Brunson crisis in August 2018, there were threats such as sanctions and verbal attacks such as “I will ruin your economy,” CB reserves did not erode. With the increase in interest rates, there was a record net international reserve level in February 2019. As explained above, what has changed in the pandemic?

We are, indeed, seeing an adventurous economic policy and its consequences. When one makes economic mistakes, then CB reserves erode. 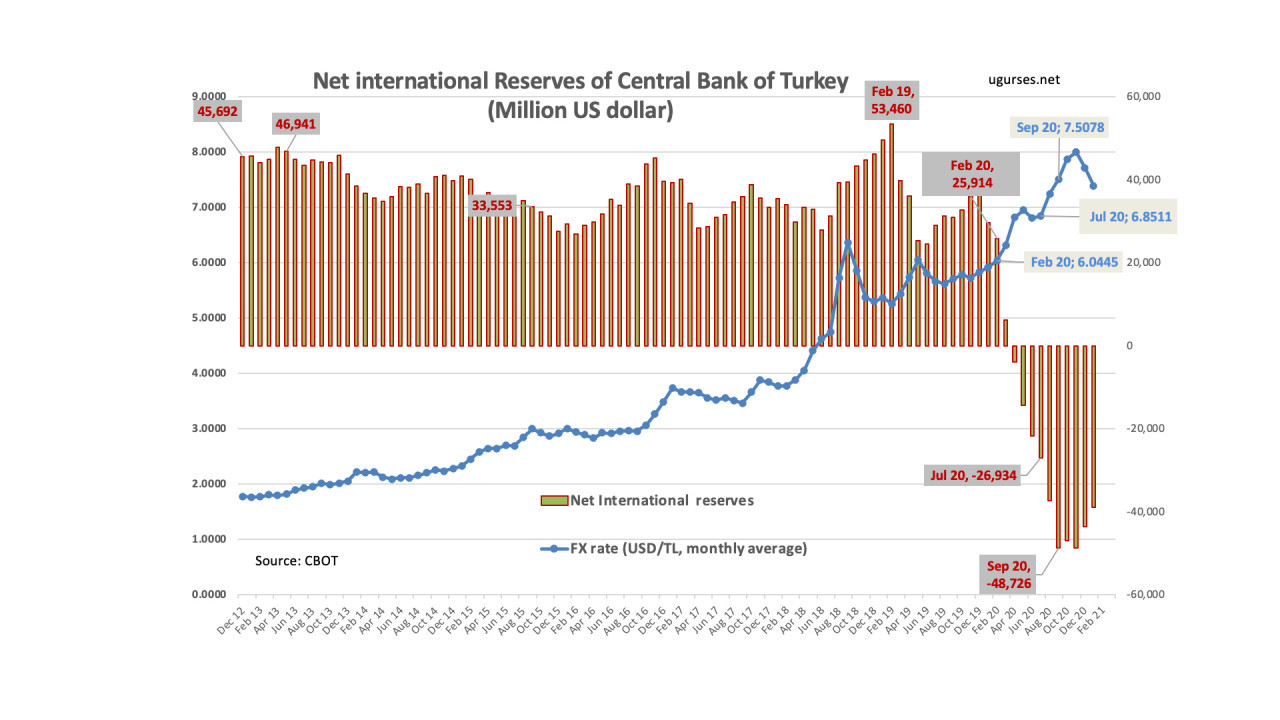