The new three-year 'Medium-Term Economic Program of Turkey' covering the years 2022, 2023 and 2024 was published at the exact timetable defined in the law. In previous years, the issuance of the program has always been delayed, probably because of not taking the law seriously. It would be publicized in mid-October, almost at the time the budget would be sent to the parliament. This is the first time it has been published just in time. In fact, nobody was expecting this.

Another aspect in terms of form was that, while its name in the law remained the same, it was quietly announced in the recurrent issue of the Official Gazette as the “Medium-Term Program” (OVP) somewhat modestly. Its name had been changed after 2018 to “New Economy Program” and packaged like an “innovation. It was even offered to the public with presentations accompanied by infographics specially prepared for the press and the business sector. 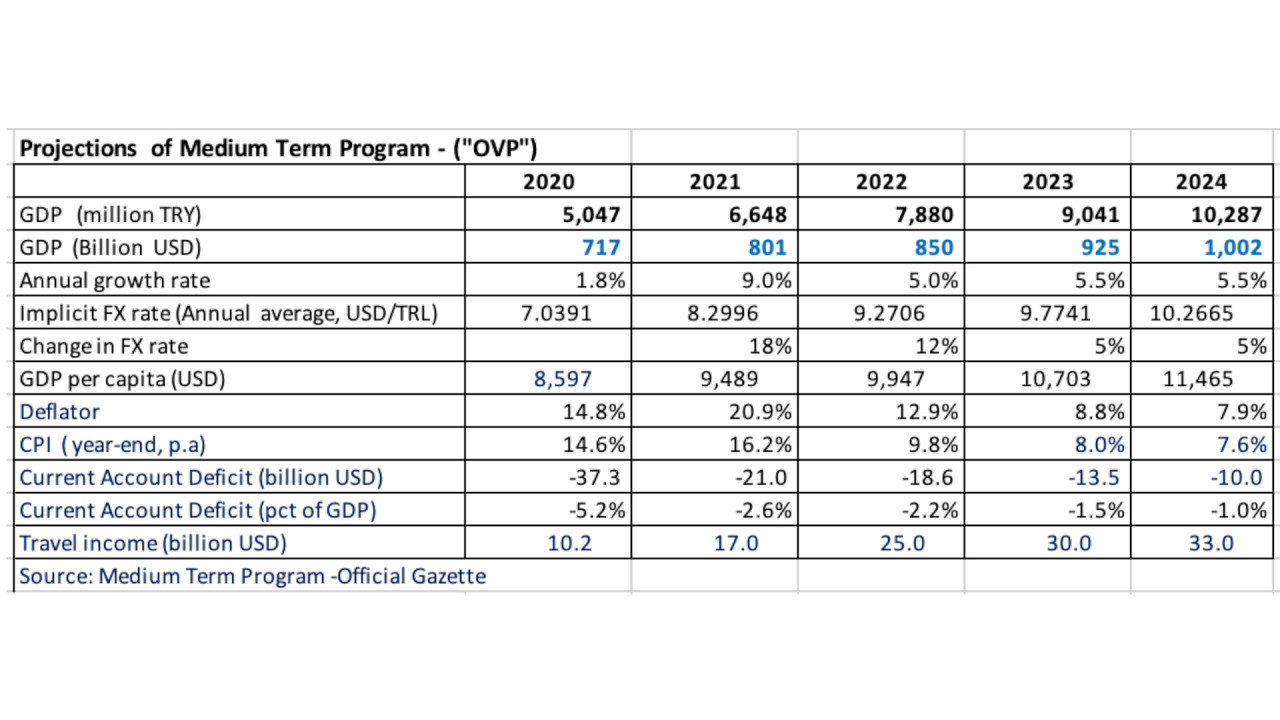 In the content section, I immediately noticed that inflation in the OVP was estimated at 16.4 percent. This was a month after the Central Bank announced its inflation forecast of 14.1 percent for the end of the year in its Inflation Report. This means 4 percentage points of cumulative inflation for the remaining four months of the year. Even though this forecast is also optimistic based on the current trend of inflation, it actually does not take the Central Bank’s forecast seriously. The bank's forecast, announced just a month ago, said it would reach 5 percent in 2023 whereas in the Medium-Term Program it is 8 percent; and 7.6 percent is predicted for 2024.

Now, when we come to the general macro forecasts, the Medium-Term Program forecasts a growth of 9 percent for 2021. This, covertly, predicts 4.9 percent growth in the second half of the year compared to the same period last year. This is a quite likely scenario for the third quarter.

The most important support in the growth performance in 2021 is known to be the low base effect in 2020. When the rising commodity prices are added to this, we are witnessing an acceleration in exports even above 2019.

Global demand, which boosted right after the lockdown in 2021, has also created record increases in commodity prices. Cost of transportation has also skyrocketed. Commodity producers and those who processed and produced final goods benefited from price increases. This is clearly not a sustainable situation. This is the same situation that is also seen in Turkey’s exports.

While the country’s rulers were happily boasting about the 21 percent growth – with the contribution of the base effect, the trade minister shared a tweet saying, “In August, our exports increased by 52 percent to $18.9 billion, the highest figure for any August ever.”

The problem is, how long can exporters and producers in be able to sustain this situation while they are under the pressure of rising costs?

According to Turkish Statistical Institute (TÜİK) data, the annual intermediate goods cost increase was 54.7 percent and the manufacturing costs increase was 45.4 percent in August. The annual exchange rate increase is 15 percent. For the exporter, those days of the foreign exchange rate advantage are over.

While the country’s rulers have been bragging about the record number of export deliveries that have shifted to August due to the nation-wide holidays, they are not mentioning the costs and their effects at all. Long-term OVP forecasts are not very encouraging.

First, in every OVP without any concrete direction, the economic growth forecast is predicted and declared as 5 percent, and this is justified by a projected increase in private consumption by around 4-5 percent and an increase in private sector fixed capital investment by 7-8 percent. Thus, a formula is found to reach the math of 5 percent. The 2022-2024 OVP is processed with such a formula. From 2022 to 2024, private consumption was assumed to be increasing by an average of 4.7 percent, while private investments would increase by up to 8 percent.

Again, as in “The Joy of Painting with Bob Ross,” as it happens in every forecast, the 2022, 2023 exchange rate and deflator estimates were made at a level that has increased per capita national income to $10,000 in 2023 and also, the total national income to $1 trillion in 2024. Exchange rate increases were estimated to be low and deflator was estimated to be above them. I think the technocrats who were asked to do such a retouching ended up with 2024 national income as around “$1 billion,” as if they wanted this to be noticed.

Thus, our foreign trade deficit remained stable at roughly $50 billion in the three years from 2022 to 2024, but our tourism revenues climbed from $25 billion in 2022 to $33 billion in 2024. Thus, our current account deficit will fall to 1 percent of national income in 2024, while the foreign exchange rate has the lowest increase at the end of 2024, at 5 percent.
Of course, such a wish looks very pleasant. Inevitably, the first thing that comes to mind is: It would make sense if there was a vicious and implicit assumption that this scenario would be implemented by the new government, which will take power after the 2023 elections.

This is an enjoyable probability.

This is because the government, having exhausted all its tools, cannot possibly reach the figures given in the OVP. However, it is not difficult for a new government that would establish confidence, at the same time launch political normalization, rule of law, fundamental rights and freedoms, competence and reestablish institutions and rules, to then carry the country to the situation depicted in the OVP.

In this respect, the forecasts for 2023 and 2024 seem quite realistic if they were processed with the assumption of political change.