Opposition parties, particularly the main opposition Republican People’s Party (CHP), non-governmental organizations, and a portion of the press, are seeking to find the answer to this question: What happened to $128 billion?

The figure “$128 billion” is the sum of the drop in Turkey’s Central Bank’s foreign currency reserves over the past two years. Maybe this figure is more than that. But this figure is accepted symbolically.

In March 2019, before the local elections, the Central Bank’s foreign currency reserves were transferred to public banks using somewhat shady “backdoor” methods and then sold covertly to the market to make it look like exchange rates were stable. This was done so that the ruling party could win the big cities by avoiding any kind of tension regarding the economy.

These sales that started in March 2019 reached $22 billion by the end of June 2019, which was the month when the election in Istanbul was repeated. In addition, one can see that public banks also eroded about $3 billion of their foreign currency assets on their own balance sheets. Thus, during the 2019 local election period, $25 billion of public money in foreign currency reserves was eroded through political directives. This situation is a first in the history of Turkey. A significant portion of the foreign exchange reserves which were actually accumulated with difficulty were sold to serve domestic political targets.

Let me add another note here: Even during the Father Brunson crisis in August 2018, there were no foreign currency sales, and the exchange rate returned to its initial rate with an interest rate increase and subsequent release of Brunson.

Even when the U.S. President (Trump) threatened to “destroy” the Turkish economy, foreign currency was not sold. That situation was not considered “a threat from a foreign power.” But the foreign currency reserves were melted down for domestic political objectives, at a time when there was no apparent necessity.

At an inflation report meeting at the end of April, I asked Murat Çetinkaya, the governor of the Central Bank at the time, about these foreign currency sales, those several accounting maneuvers to hide it and the covered-up of the data. I did not receive any answers to my questions. Afterwards, both the sales and the covering up operations continued.
Some of the foreign currency reserves that were sold were replaced in November 2019. Thus, the total amount of sold foreign currency reserve was decreased, corresponding to $12 billion. The $3 billion deficit was closed on the public banks front. In December 2019, $4 billion was being sold again.

By 2020, action began in February and another 10 billion were sold, bringing the total drop to $28 billion. By March-April-May, the amount eroded by (with a round off) 20-10-10 sales reached $70 billion.
In May, foreign currency sales continued, trying to keep the foreign exchange rate at the level of 6.85. In the Period May-August, $30 billion was spent. During the period from May to August, the exchange rate was “fixed” at 6.85 and reserves of billions of dollars were eroded.

In June-July-August-September, the round off of sales were 5-5-10-10, respectively, reaching $100 billion cumulatively. In addition, public banks also sold their own foreign currencies. Although they looked like they were violating the rules set by the Banking Regulation and Supervision Agency (BDDK), nobody made a sound. State-owned banks sold another approximately $8 billion from May to August. This deficit of public banks was closed by the Treasury by selling foreign currency bonds to them. As a result, a total foreign currency deficit of $12 billion was financed by the Treasury, thus, the public.

A total of $102 billion of foreign currency has been sold. This can be calculated from the Central Bank’s “International Reserves and Foreign Currency Liquidity” charts. Although the data on how many swaps were made on which date is hidden, but recorded.

We still have not reached the $128 billion. There is $102 billion foreign currency sale, but there is also foreign currency from rediscounted loans to foreign exchange yielding transactions that should have entered the Central Bank. During this period, it is understood that these currencies did not come to the bank; they were also eroded. If we take into account that this is roughly $25-26 billion, then we reach $128 billion. There is more; $12 billion were sold by public banks. This amount was later undertaken by the Treasury. If we add this also, we reach $140 billion. 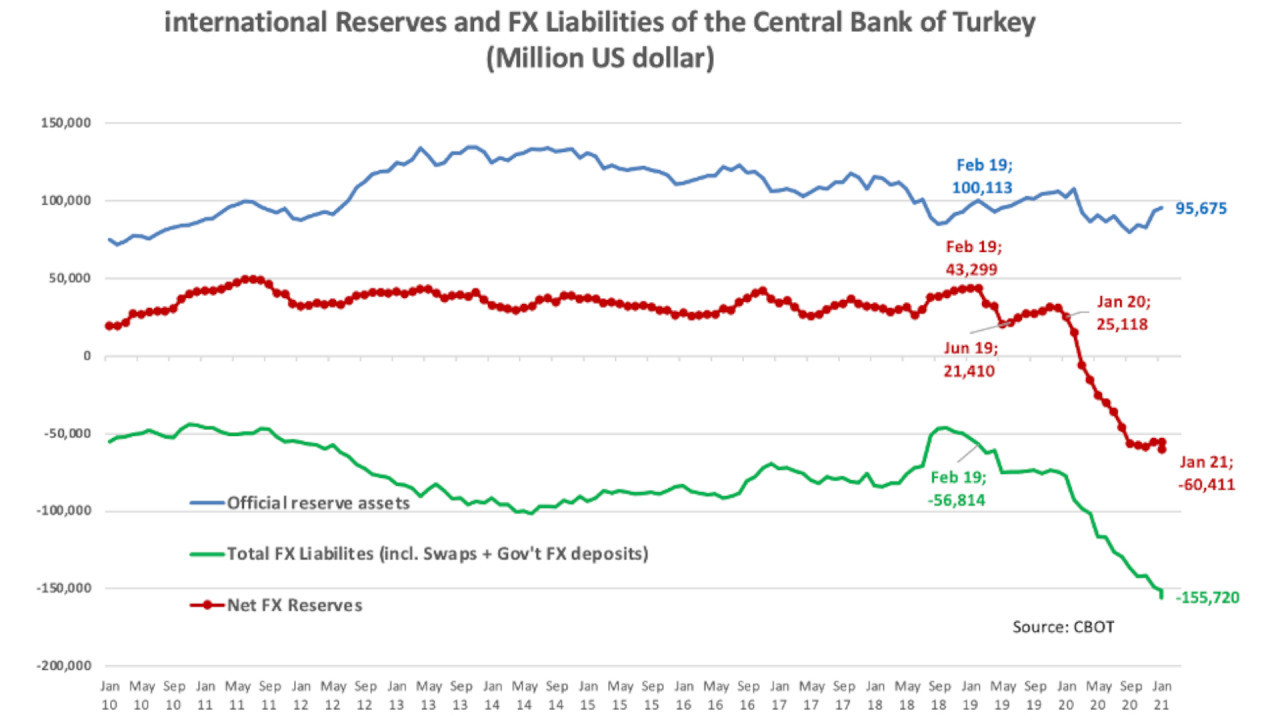 But if you ask the people who run the economy, they answer that reserves are present as they were. However, foreign currency reserves have been eroded, these eroded reserves have been replaced by debt, i.e., swaps. Thus, a gigantic erosion has been done. In a sense, whoever comes to power after an election in the future will find a wreck hidden under the carpet.

Why does the CB hold foreign currency?

The Central Bank explains this is its website as follows:

“In Turkey the CBTR is responsible for keeping and managing the gold and foreign exchange reserves. The CBRT keeps Turkey’s reserves in line with the following objectives:

- Building confidence in monetary and exchange rate policies and supporting these policies
- Making available the foreign exchange needed for payments of domestic and external foreign currency debt of the Treasury
- Rendering the Turkish economy resilient against unexpected domestic and external financial changes
- Enhancing the credibility of the Turkish economy in international markets.”

It does not say, “The CB can try to hide it if you make a mistake in monetary policy,” or, “You may try to lessen the government’s election concerns.”

If the economy is good, which domestic development necessitated the erosion of $128 billion? Even after the bloody coup attempt in 2016, there were no foreign currency sales. What kind of a need arose that foreign currency reserves were drained and melted like ice? This has not happened even when there was a threat from Trump directly to the country’s economy.

How was “the credibility of the Turkish economy in international markets” enhanced by eroding foreign currency reserves?

Those who ask, “Where is the 128 billion?” are not only referring to an evaporated fund. They are asking for an explanation for which need, how, by whom, by what means and how much of this was sold at what rate.
The ruling party’s top executives first said the foreign currencies were in place, but now they accuse those who ask the questions by being ignorant, pointing out that they are, right now, being sold at the market rate. But they should answer the following questions to “inform the ignorant:”

These are the essential questions:

What exactly is the amount of foreign currency reserves sold and eroded? Over $128 billion? By what means have the $128 billion in foreign currency reserve exited the Central Bank? Is there a Board of Directors decision or an Executive Committee decision regarding these outside sales? Has a Minute Book on sales been kept? Was there a political directive to erode the country’s reserves to such a level that it endangers financial security? Whose directive was this? Where were the foreign currencies taken from the Central Bank transferred? Through which mechanisms they were sold? Interbank? Through currency brokers? Through trading systems created by international banks or financial institutions? Were the brokers “blind brokers”? Or did the buyer and seller parties make the sales with a match so that they knew each other?
Who has decided to sell foreign currencies on a daily basis? At what exchange rate and at what quantity they were sold? Who has decided how much to sell at what exchange rate? What has happened to the Turkish Liras received by sales? Was it immediately transferred to the Central Bank? Has interest and commission been obtained over it? Are the buyers of the sales known? Have block sales been made? If so, who was it sold to, how much, from what rate? Were there negotiated sales? How much is the exchange rate loss (including positions taken by the Treasury) from the sales?

The floating exchange rate regime automatically ensures stabilization in the foreign exchange market due to its structure and functioning. When the exchange rate rises, the level of the rate becomes expensive for other buyers, in a way the bar is raised. This may no longer appeal to buyers at that level.

As in the past two years in the floating exchange rate regime, if sales are made at all levels in the form of organized sales, a “wholesale market at a fixed price” is created for buyers and more buyers join the market. Especially as it becomes clear that the foreign exchange reserves are decreasing, more buyers will come. This method drains the reserves.
The Central Bank sells foreign currency in two ways: Sales tender and direct intervention.

The second way is direct intervention. Here, the Central Bank sells directly, showing itself. The effective method is actually beyond direct selling, it is when the bank comes out and sends the message to the market to “calm down.”