Between February 9 and 21, a survey was conducted in Greece and Turkey regarding citizens’ perceptions of one another, which was organized by the think tank the Hellenic Foundation for European & Foreign Policy (ELIAMEP) and the Dianeosis research institute. The survey, carried out by MRB in Greece and KONDA in Turkey, was published in April. In total, 1,022 Greek citizens and 1,163 Turkish citizens were surveyed.

The survey brought to light, at some points, a great deal of agreement, and at other points, very different positions.

Regarding the question of what the biggest problems in bilateral relations are, the results show that both countries largely agree. The current, hotly-discussed issue of the East-Med for 58 percent of Greeks and almost 67 percent of Turks was thought to be the most pressing issue. Greeks and Turks who said Cyprus was the most pressing issue were 11 percent and 14.6 percent respectively. Only one issue indicates a big difference in opinion, which is refugees. 13 percent of Greeks regard this issue as most pressing, compared to Turks with 5 percent. However, this should not be surprising, considering refugees in Greece largely came via Turkey. If the same questions were asked in Turkey regarding Syria relations, perhaps this issue would be among those considered most pressing.

Question: What is the major issue in bilateral relations? 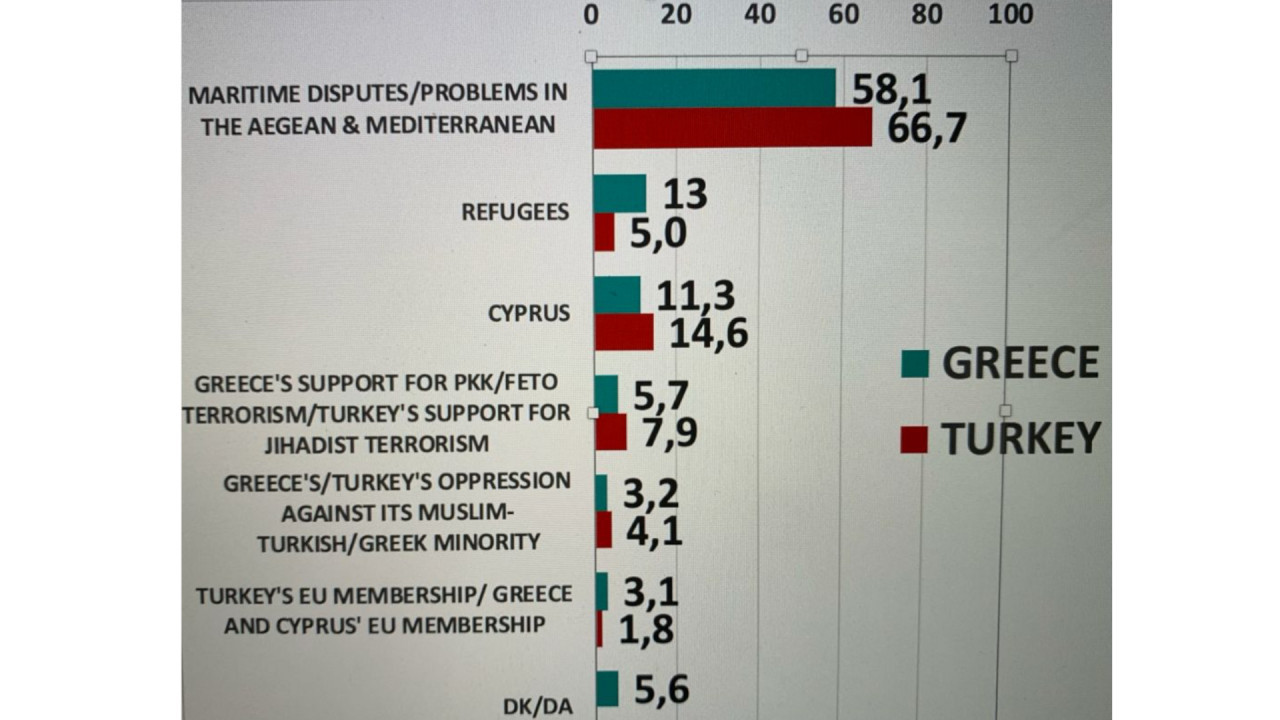 The confrontations last year in the East-Med, triggered by Turkish gas explorations in economic zones claimed by either Greece or Cyprus, made military confrontation possible. However, according to the survey, such a scenario worries Greeks with 70 percent, much more than Turks with 44 percent. In case of a military confrontation, the majority of both groups are confident that they would be able to defend themselves, but Turks are more confident with 83 percent, compared to Greeks with 59 percent.

The survey showed significant differences in personal attitudes towards and experiences with the neighboring country. While almost 37 percent of Greeks have visited Turkey at least once, the same is true for only 2.7 percent of Turks. However, this is not necessarily related to disinterest among Turks, but instead a result of the difficulties for Turks wanting to travel to Greece. In Turkey, there are roughly 8 million passport holders. Of these, 5 million are issued only to make the pilgrimage to Mecca. There are several reasons for this low number of passports: One is the price, as a passport valid for 10-years costs in 2021 more than 1,200 liras (more than 100 euros). So, for a family of four this would mean 4,800 liras, in a country where the minimum wage is 2,825 liras. Another reason is that, while Turks can travel visa-free to all South American countries, this is only the case for the non-EU Balkans countries and countries like Georgia and Ukraine in Europe. For the EU, a Schengen visa costs 80 euros per person (more than 800 liras).

However, in total in 2019 more Turks visited Greece than the other way around. In 2019, some 836,882 Greek tourists visited Turkey, but in 2020, due to the pandemic, this number dropped to 136,305.  On the other hand, in 2019 more than 1 million Turkish citizens visited Greece. Of the more than 31 million total visitors to Greece, Turks made up 3.5 percent of all foreign arrivals, coming in 8th overall, thus, contributing significantly to one of Greece’s most important economic sectors.

While people often say that the cultures, food, music, etc. are close in Turkey and Greece, this is not reflected in the survey results. On a scale from 1-10, 10 being the closest, only 11 percent of respondents in Greece and 14 percent in Turkey said that the cultures are close (8 to 10). A majority in both countries of 47.3 percent stated that the closeness of the cultures is between 4 to 7 and almost 40 percent regarded them as distant.

These results are similar in both countries, however, the frequency of negative stories regarding the other within families is quite different. In Greece, 32 percent of respondents had heard something negative about Turks in their families, while this is only true for 6.4 percent of Turks regarding Greeks. The overwhelming majority of Turks, more than 82 percent, had not heard negative things about Greeks. In Greece, the age factor within this issue is significant. Negative ideas about Turks were heard more frequently by persons over the age of 65, making up more than 44 percent of the total. Within the youngest age group (17 to 34 years old), ‘only’ 21.9 percent had heard negative things.

Some of the survey results are sobering for well-intentioned people concerning bilateral relations. Support for Turkey's EU accession is low in Greece with 20 percent, while 52 percent are against it. Regarding the Aegean, 70 percent of Greeks think that the Aegean is exclusively and only Greek. While more than 86 percent of voters from right-wing parties think this, 50 percent of left-wing party voters agree with it. While age is a factor, still 62 percent of young adults agree with the same statement.

Some years ago, I ran into a demonstration in Athens which had a slogan saying that the Aegean is neither Greek nor Turkish, but instead belongs to the fish -- and not Greek fish. Unfortunately, even if the demonstration was big, in reality it seems few tend to agree with that sentiment.

Fehim Taştekin How to seize an island: Northern Cyprus
Most Populars
Photos of Erdoğan's extravagant summer home revealed amid mass poverty Turkish men continue to turn life into living hell for women Model faces up to 7 years in jail for posing nude in Hagia Sophia Member of Turkish gang banned in Germany revealed to be close to AKP 'Love Erdoğan' billboards pop up across Turkey to counter ad in US 25 injured in metrobus collision in Istanbul during rush hour