The Central Bank issued its first inflation report of the year on Jan. 28. Central Bank Governor Naci Ağbal made the presentation, delivering a neat and realistic inflation report speech, perhaps the first for a long time. The presentation regarding its content and lineup qualifies as a textbook to be taught in economics courses. He should personally explain this to those segments and those politicians who believe that “low interest rate would create supply-side price stability.”

What I mean by using the adjective “realistic” is that it explains the reasons of inflation perfectly for those who blame opportunists and speculators for high inflation rates and who love to launch a witch hunt.

In his presentation, Ağbal explained that in 2020, demand-side effects due to strong credit momentum were determinant on inflation through direct and indirect channels. He said the depreciation of the Turkish Lira led by the effects of the rapid recovery achieved in the economy with credit expansion on current account balance, reserves, risk premium, dollarization and inflation expectations had an important role in the rise in inflation. He also referred to the impact of the rise in international food and other commodity prices.

The main theme of inflation growth was massive credit growth and its boosting effect in domestic demand. Mr. Ağbal pointed out that the effects of this credit growth will be seen in the first quarter of 2021.
One of the boxes (box 2.5) issued in the Inflation Report is titled “Main Macro Determinants of Inflation in 2020.” The box below explains that the foreign exchange rate is the most significant factor. Exchange rate accounts for the 6.2 points of the inflation rate of 14.6 percent in 2020. 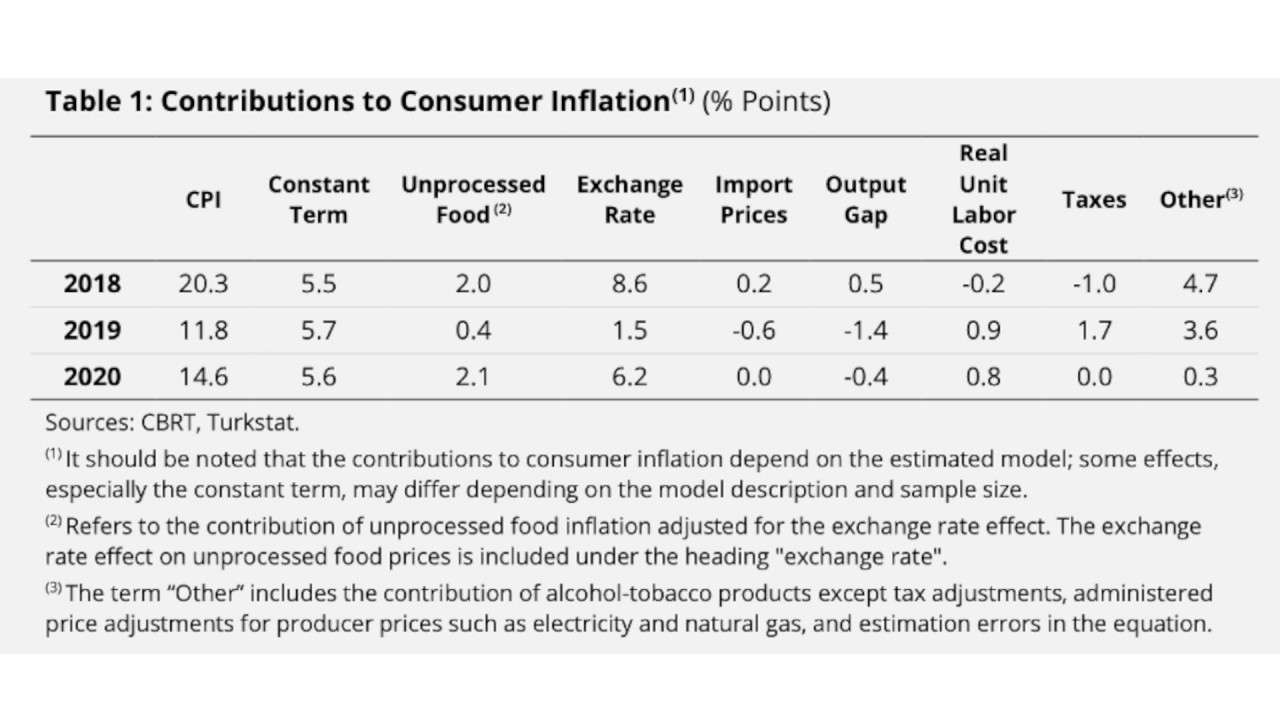 The constant term, which shows the rigidity of the inflation rate, has increased from 4 points to nearly 6 points. 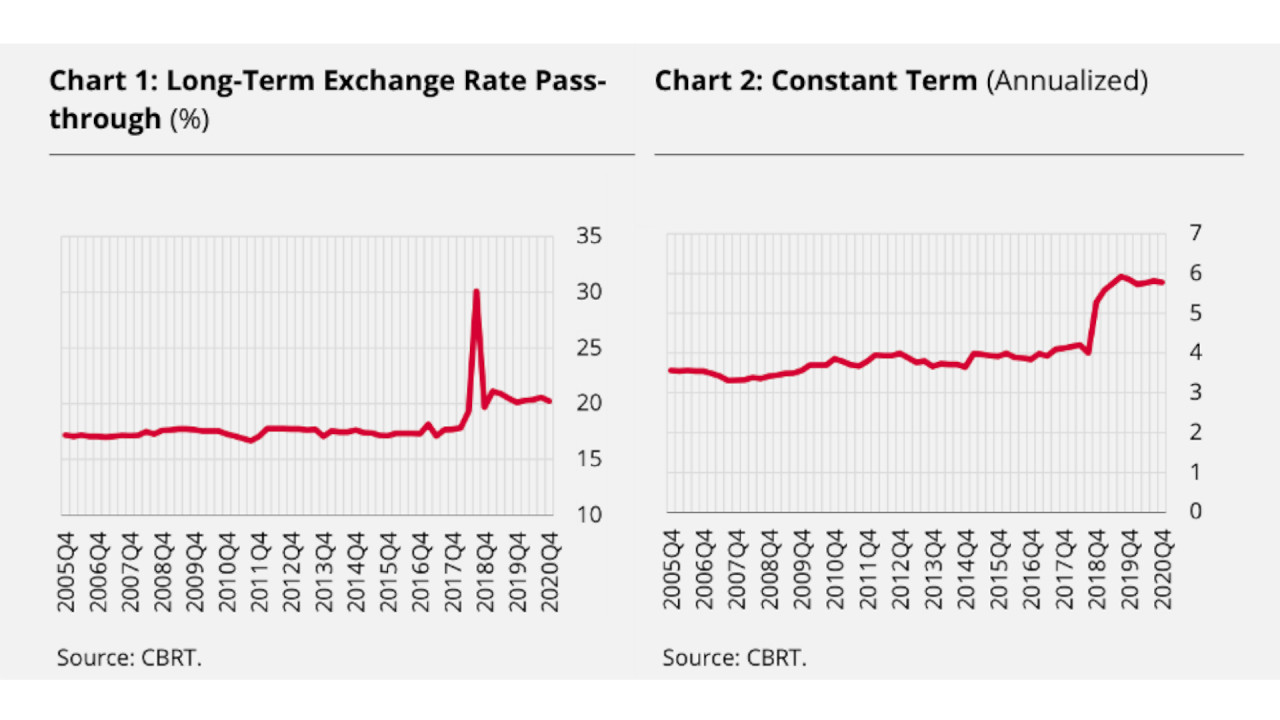 This rigidness calls for an even higher policy interest rate to be determined by the Central Bank. The relevant lines in the report are, “The constant term in the equation that changes over time is essentially closely related to the inflation trend and expectations. Although it is a variable that changes rarely in the short term and shows inflation rigidity, it is considered as a component under the control of monetary policy since it is affected by the steady decreases and increases in inflation and thus in expectations. As a matter of fact, this variable, which has settled on a higher plateau since the second half of 2018, draws a picture in line with the persistence of inflation in double digits and the course of expectations.”

The Central Bank estimates that the inflation rate will be between 7.3 percent and 11.5 percent (with a mid-point of 9.4 percent) at the end of 2021. In other words, it has not changed its forecast in October 2020.

This means that there will not be a cut in rates and if necessary, there will be increases.

After this forecast in October, inflation rate has increased and the bank raised interest rates. Policy rate was raised from 10.25 per cent to 17 per cent in two phases. Now the bank says this tight policy will be maintained “for an extended period.”

For the first time, the minutes of the January meeting of the Monetary Policy Board stated the criteria for this. It said that indicators for the underlying trend of inflation and pricing behavior, diffusion indices, demand and cost factors, and inflation expectations will be monitored closely.

The inflation trend in core goods is around 25 percent, in core inflation around 20 percent, in services it is around 14 percent. The diffusion indices are the second highest for the past 15 years, at around 55 to 60 percent.

The backbone of this report presented by Ağbal stands on very accurate foundations. However, the issue is that within the framework of this presentation of Ağbal and the forecasts of the Inflation Report, the forecast has not changed. This leads to the assumption that an additional tightening will be made. Will the “hawkish” Ağbal be able to do this? Or will he be a “pigeon” and fly away from the institution?

Especially recently, in the pro-government media, he has been attacked a lot. Reading them, you would think that Ağbal is responsible for the wreckage we are dealing with today.

As a matter of fact, in the Q&A section, upon a question referring to the political objectives of the President, Ağbal responded that as price stability is achieved by lowering inflation in the medium term, this would be in accordance with the political objectives of the President. Ağbal said it would be wrong to evaluate a cross section of the economy without considering its before and after.

The issue is that for politicians “medium term” seems like a century. Especially if the politically-appointed son-in-law has left a gigantic wreck and you need a much longer time to remove this wreckage.

In the Q&A section of the presentation, Ağbal spared much time to the pro-government media. This portion of the media, known to be close to Berat Albayrak, the former Finance Minister who was removed from office, is increasingly more critical of Ağbal.

If I had the chance, what would I have asked? Let me write it here:

1. There was much emphasis on the topics of price stability and communication. You have highlighted that the main reason for the increase in inflation was the rapid credit expansion. However, the decisions that nurtured and forced this process were signed by members of the Monetary Policy Board. How do you explain this to economic units that are expected to trust you, this report and your discourse? Is it possible to trust the tight stance of those members who facilitated this destruction?

2. You are saying that the Central Bank funding has shifted more to the OMO (Open Market Operations) and that the share of swap has declined. The Central Bank still does not publish how much Turkish Liras it gives with swaps and at what interest rate. Issuing the total outstanding swap amount in dollar terms does not clarify this. When will you publish the amount of TL given with swaps and its rate?

3. You said, “The issue of adopting the fight against inflation is very important. All segments of the society in this regard and all actors in the economy must believe in this process. Decision-makers also need to be determined.” Do you have plans to communicate with - as well as those who do the pricing - also with those who are subjected to these prices, wage earners, for instance, labor unions and other NGOs?

4. Finally, let me ask the essential question regarding this article: Naci Ağbal has gained quite a lot of reputation in three months since taking office. He has also succeeded in outclassing verbal and written communication from the Central Bank. Will he be able to institutionalize this “hawkish stance?”